Building a healthy work and life routine, with Paul Smith 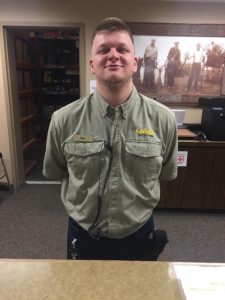 What’s better than having a job you like? For Paul Smith, it’s having a job that fits his personality, his strengths, and his passion for staying fit.

Smith, age 21, is in his final year as a transition student at the Community Transition Program (CTP) in Lake Oswego. He’s been employed at Cabela’s, an outdoor gear retail store, for more than a year. Smith also joined the fitness center located next to his work. He starts most days with a workout at the gym, followed by his shift at Cabela’s. Smith no longer attends his transition program full-time, but continues to check in regularly with his teacher, Rollie Wilson, and classmates. Between work, exercise, and school, he’s built a busy and healthy routine.

“Going to the gym early is like coffee for me. It gets my energy up and then I’m ready for work,” said Smith.

Finding the right fit in employment.

At first, Smith worked in the warehouse, but he’s been promoted to the footwear department. He keeps the shelves stocked to be sure there are no inventory gaps in shoe styles or sizes. Working in the store fits his personality—he enjoys talking with people.

“I like this job because I’m around really positive people. Both the shoppers and the people I work with. Also, I do like shoes! I wear a size 13 so I appreciate having all the sizes out and available,” said Smith.

Previously, Smith worked at Best Buy. While he didn’t feel that was a perfect fit for him, the job was a valuable opportunity to learn about work environments. He also learned how to use job coaching and other employment support services. According to Nan Deane, Transition Specialist at CTP, even the jobs that aren’t a perfect fit are good learning experiences. “A job doesn’t have to be forever—every work experience teaches important lessons about communicating and about yourself,” said Deane.

For his job at Cabela’s, Smith worked with Good 2 Go. This organization provides services in employment, independent living and community integration in the Portland area and in Central Oregon. Their job development coach helped Smith define his goals and find businesses that matched his interests. Once he was hired at Cabela’s, the Good 2 Go job coach helped him get comfortable with his work responsibilities. Smith still stays in contact with his job coach.

Getting out of the comfort zone to self-advocate

A few challenges have come up along the way. Smith had to learn new technology on the job, like online ordering for customers. He mastered that with practice,  repetition, and with coaching support. He’s also had to advocate for himself and communicate with his supervisors about what he needs to do his job well.

“There were times that a lot of things came at me at once. I had to explain my disability and say that I do better with one thing at a time. I need to break the work up and do one step at a time,” said Smith. He’s created a system for himself to limit the time he spends on one task, so that he’s sure he’ll get through his whole list of duties.

Smith recognizes that self-advocating is key to his success. Sometimes it can feel uncomfortable but speaking up is worth the effort. “I used to hide in my shell like a turtle,” he said with a smile, “but I had to get out of my comfort zone. If I still acted like that turtle, then I’d never start doing the things I really want to do.”

As Smith’s transition specialist , Deane has seen his communication and self-advocacy skills get stronger. “Paul has realized that asking questions is not a sign of weakness, but propels him forward. He’s always been a kind and compassionate student and thrives as a leader. Now he’s managing his schedule so well. We are super proud of him,” she said.

What advice would Smith share with other transition students? He’s got a few principles that he finds helpful to make the most of every day. “Do your best, bring a smile, keep your head up and look presentable!” he said.